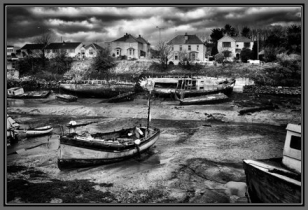 It’s white wings fluttered as if it would take flight at any moment or that it was resting and the breeze (although I felt none) was moving the soft, fragile, white, gossamer blades like it would hair or grass.

It moved a few centimetres along the ground, the small troughs and peaks, though barely noticeable to me, huge and daunting and tiring to descend and climb. It seemed as if it were trying to escape the shade and make for the full sun as if that would give it the energy enough to fly off to a distant flower or plant.

But, it was obviously having difficulty and I thought – your struggle seems so pointless as you’re obviously dying’.

I continued to watch its struggle as I drew, again, on my cigarette. I wondered why this place, this car port, seemed to be such a magnet for the dead and dying. Certainly this place has more than its fair share. The flying ants, discarding their wings the moment they have landed in the large ashtray with its vertical, shiny, slippery sides, so there is no way out; the bees, the wasps, the flies and butterflies. ‘Why here?’, I thought, and then I thought that, as I have been smoking for so many years now, it was fitting that I should be there too, with another cigarette, another death-stick.

As I watched, it stopped. I watched it still, wondering if this, in fact, was the end. A moment later it seemed to separate from its wings, the body moving away, slightly and then turning to look back as if to say ‘what happened to you guys?’. And then I realised that the body moving away was, in fact, an ant, hidden previously by the wings, hidden by their opacity – this was the killer and its prey.

So now the picture was different. The moth already dead (probably), the ant not dying at all but seeming to take a breather. In this heat you could hardly blame him. His prey larger than him even just in body; with the wings a seemingly impossible task.

He tried again, going underneath to lift or pull or push the huge lunch towards the nest. The breeze was a problem though, catching the fine wings and pushing him back, sideways, over – making the whole task much more difficult.

He stopped again. I could see him, as if he was in the film Antz, rubbing his head, exclaiming that this was too difficult and how the hell was he going to get this home.

Then he seemed to remember that, actually, only the body was required and that the wings were surplus to requirements. He went back to the lifeless form. A wing seemed to be thrown away, caught by the wind it fluttered inches away and looking like a discarded petal from some small, white flower.

Another wing landed near the first. A third wing somewhere else. The ant was now in control although, at this point, he seemed exhausted by his fight with the (now) inanimate lunch. I watched him try to take it this way and that, now without a goal in mind.

I had finished my cigarette.

The final act of the play – I looked up to see a bee fly in, hit one of the pillars, somersault through the air and land, upside down, lifeless. I watched for a few moments more, amazed. I guess they were waiting for applause.  None came nor would come.

2 thoughts on “The Final Resting Place”