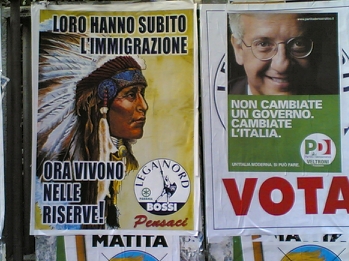 For you lot in the UK (or anywhere else outside Italy) you may have noticed in your news that Italy is going to the polls this weekend.

We commented on our walk back from the cinema (we went to see Sweeney Todd – great film) the other night that an extraordinary amount of paper went into display posters to laud one candidate or party or another. In fact, close to election time they put up special poster hoardings just to display the political posters. And the posters are over-posted by the next day with a poster for another party/candidate – making them several layers thick. Hmm. What a complete waste.

Now here, as in the UK, there is much talk about immigration and the problems it causes. As Man of Roma posted, immigration is a relatively new thing here. Emigration has been done to death, probably hence the fact that pizza and spaghetti can be found almost anywhere in the world, but immigration is a new and frightening thing. To be honest, it IS noticeable that, even in the last few years, the number of non-Italians in Milan seems to have increased at a great rate.

And, as in the UK, the political parties make a great play on their solution to the ‘crisis’.

But I am disturbed by some of the things I hear or read. One instance is the poster above, next to Wallace’s.

Lega Nord, for those that don’t know, is the party that wants to separate the North from the South (OK, it’s probably much more subtle than that). From what I am told, they feel that the North is richer and if the money was kept here, the North would be a great country (we have the UK-famous ‘North/South divide’ only it’s the opposite to the UK in that the North is richer and more powerful whilst the South gets all the hand-outs). For those of you who don’t read Italian, the words on the poster without Wallace mean something like: ‘They suffered immigration…..now they live in reservations’.

I cannot imagine a similar thing being used in the UK, even by the BNP! That they should compare the Italians and their current situation to the American Indians seems absurd. But it has some resonance with some Italians, maybe. Just as it is in the UK, there are those people who easily put the blame of all troubles on the ‘foreigners’. Of course, if I am there as they say it, it is added that I am excluded! Although I am one of ‘those foreigners’ that has taken the job of an Italian (figuratively speaking, of course).

Worse still is something that has been said to me twice (as a joke but not a joke, if you see what I mean) and it is to my great shame that I didn’t roundly admonish them at the time. The thing that was said was along the lines of ‘Hitler had the right idea’.

I admit that the shock of someone saying it leaves me quite speechless. What an appalling thing to say, even if it is in jest? But this is how it starts, I think. First parties like the BNP and Lego Nord say something, then the media follow that through, particularly rags like the Daily Hate Mail which twist the truth of a story get people to thinking that something in it must be right.

And there’s the fear, of course. Fear of the unknown. Uncertainty as to the future.

Apparently, both the main parties, Buzz Lightyear’s and Wallace’s believe (or say they believe) that they can get a working majority. Instead, it is more probable, as with (nearly?) every election in Italy, that a coalition will be required to govern. If Buzz wins then the Lega Nord will be the ones who are likely to link up with him. Wallace is looking more attractive after all.

2 thoughts on “‘They suffered immigration…..now they live in reservations’”