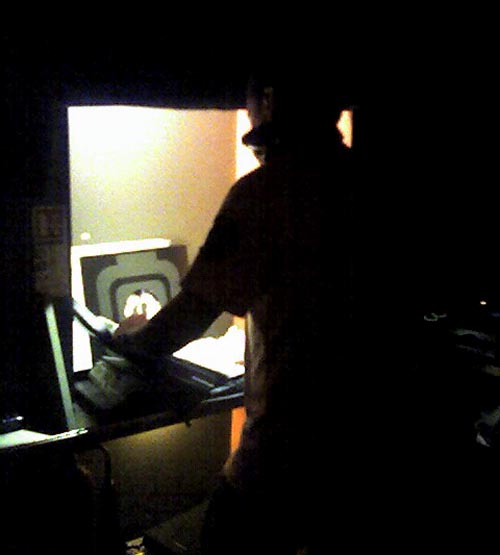 She is wearing a red dress today. She tells me that it is the first time she has bought a red dress as she ‘doesn’t wear red’. I say, without any feeling, that I think she looks nice. She thinks that makes me a gentleman, which it does not but I don’t correct her, even if I should.

It started with me looking at her fingernails. The new fad of having them half covered in sparkley bits is something she had succumbed to. After all, she likes to think of herself as ‘young and hip’.

She goes on to say that she is tired of this fad now and has told her manicurist that she won’t be doing it any more. She is going back to short nails with brown. I am not impressed. Brown?, I say in that disgusted voice. Well, Bordeaux, she say. OK, so red then, I reply.

That’s why we talked about the red dress.

She then starts telling me about some film she watched last night. She can’t remember the title. But she’s going to describe it anyway. Already, I can tell that I am going to be bored and what I really want is for her to stop.

It’s the price I pay for a ‘half coffee’, which thing I’ve never actually understood but it’s a ritual for her and I benefit by getting the half coffee.

The film stars Kim Bassinger. She starts to tell me the plot from the beginning. I wonder if the price for my half coffee is actually worth it. I want to go back to my desk. I feign surprise, interest, enjoyment, etc. I briefly wonder if she can actually tell the difference. Would she know the real thing if she came upon it and, anyway, if she did ‘get it’, would it scare her? Would it make her ‘real’? Would she become less ‘plastic’?

And I wonder if, by feigning the responses that she requires, I am becoming more plastic myself?

The price of coffee is expensive, I decide.

6 thoughts on “The Price of Coffee and Plastic People”