There are hidden treasures in Milan, should you be visiting. Some of them are more hidden than others.

There has been a link on the right of this blog for the Dialogue in the Dark for some time, and I’ve written about it before, but it’s still worth a reminder.

A hidden gem that has become less hidden since it was featured heavily in the film I Am Love is Villa Necchi.

It is a stunningly beautiful Art Deco house and should be ‘must see’ on your trip to Milan. When I went there with J towards the end of last year, F couldn’t (and didn’t really want to) come. However, last week he went there and was talking about it for the rest of the week. If you go to the link, make sure click on the slideshow to see wonderful pictures of the house.

Another place that is really a hidden gem is an apartment owned by people who collected art – and then gave the apartment to the state so that it could become an ‘art gallery’. It is just off Corso Buenos Aires but so hidden away that you’d never find it if you didn’t know. It is the Casa Museo Boschi Di Stefano.

Even better, the one above is completely free – i.e. no charge!

The stunning Bagatti Valsecchi Museum, right off Via Montenapolenone has been written about by A Welshie in Italy in her dedicated post and I’m almost certain it is also free!

Milan is a great place to live and visit – providing you can find these hidden places, of course

Art.  It’s all down to what you like.  Just because someone says it is good doesn’t mean you like it (even if you can admire it for it’s skill, of course).

Modern art – even more so.  Picasso doesn’t really do much for me, I’m afraid.  Damien Hirst and his polka dot phase also left me very cold, although I did like the half a cow thing.

However, my favourite modern art stuff is video art.  I don’t know why but I can get quite excited about it all and watch it for, well, if not quite hours, certainly a long time.  Video art to me is NOT a film.  It’s something else.  It can be almost mundane but, somehow, to me, intriguing, interesting, fun, etc.

If anyone is going to London, I always tell them that a ‘must see’ in my opinion is the Tate Museum of Modern Art – for me, possibly, the most wonderful place on this planet as far as museums and art galleries go.  There I have seen the film of a woman eating a sausage, rotting fruit, a boxer and others (I know it doesn’t sound like great stuff but, really, it is).

And now there is an exhibition at the Serpentine Gallery where Phillipe Parreno is showing some of his films (and other stuff).  But there is one film that really excites me.  And that is from seeing two stills!  It is InvisibleBoy – a film of a Chinese immigrant boy with monsters and the like ‘scratched’ onto the film.

I know it isn’t everyone’s cup of tea – but video art does something for me that most other media don’t quite achieve – and, if I lived in London or nearby, this one I could not miss.  Below is the still.  You probably won’t find it exciting at all but for me it almost took my breath away.  If you go to the site link (above) you will see another still.  Really, this is something incredible. 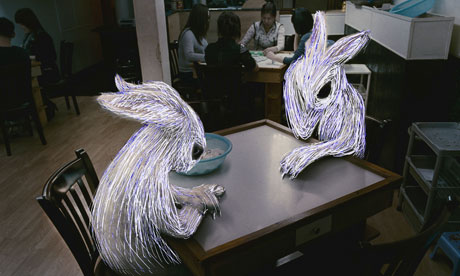 Thank goodness, at least for this morning, the feeling deep in the pit of my stomach has gone; the first time for weeks and weeks. And I suddenly feel more positive, which is great. I know that it’s not all over yet but, at least, there is an end to it which is now in sight.