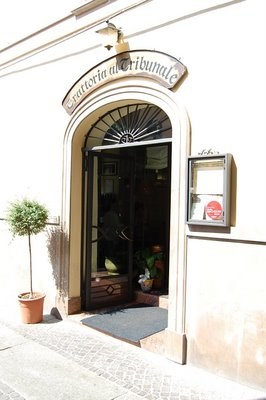 Today, at lunch, I chose to have melon and parma ham. Normally served as an antipasto dish, this was the main course and, as I haven’t had it for years, I decided to give it a try.

Of course, I then had to go hunt for the final, perfect finish to the dish. My co-workers were absolutely horrified. Really! There was that horrible shock/horror moment as they watched me sprinkle black pepper over it.

It seems that this is something never done in Italy but, for me, this dish without it just doesn’t quite hit the spot.

I looked round at everyone and said:

>Well, I am English.

That seemed OK as they think I am quite weird anyway.

So, next time you have parma ham and melon in a restaurant in the UK and the waiter offers black pepper AND if they are Italian why not ask them whether this is normal for an Italian meal in Italy. It would be interesting to hear what they had to say, don’t you think?

Italians are meticulous about cleanliness…….inside their houses. Outside it can look like it’s run down or neglected. Outside they’re happy to put up with dog poop in the street, throwing litter, overflowing rubbish bins, etc. But inside the house, everything must be spotless.

The shame is that this trait does not extend to personal hygiene. OK, so that’s unfair as not all Italians are like this (and, of course, some (many) Britons suffer the same problem). However, ride on any bus/tram/metro carriage, particularly in summer, and the stench can be quite unbearable. During the summer months I regularly take 2 or three showers a day (and, on a rare occasion, four).

But last night was a tad embarrassing. There is a person, in our building, who seems to have a problem with their water supply. I think the person lives on the fifth floor but I have obviously never met them, as I would remember, believe me.

We were a bit worried as we wondered if the other people in the building thought it was us or, to be more precise, the dogs. I can assure you it is not. Sure, when it rains they can be a bit whiffy, but that’s a doggy smell. This smell is an unwashed-for-ages smell.

Yesterday, as we were off to visit FfI, a friend who had a rather serious accident about a week ago, I was in a bit of a rush. With the temperature at about 35 degrees or higher, going to get some trashy magazines for her followed by essentials from the supermarket (wine, vermouth – oh yes and washing powder), I ended up with about four heavy bags (they use thick glass in wine and vermouth bottles

By the time I got to the flats, I was hot. I have this unfortunate ‘problem’, inherited from my Grandfather, of sweating profusely in heat when it is coupled with the slightest form of exertion. It’s not that I’m not fit, although I could be fitter. It has been happening since I was in my twenties, if not before.

But the sweating comes on big time only when I stop doing the exertion. So it was yesterday evening. I got in through the lobby door, collected the post and a lady from the fourth floor came in just after me and as the left hand lift was there, opened it. As I was getting the post, I slowed down a little. I thought ‘OK, I can wait for that lift’ (the other was on the fifth floor – and I know what that means).

However, she held the lift door open, seeing that I had a lot of bags, and offered to share the lift. I accepted and walked into the lift. The next few minutes for the lift to reach our floor seemed to last half a lifetime. >As soon as the door closed I did my usual impression of Niagara Falls. Unfortunately, it’s highly visible and there is absolutely nothing I can do to stop it. I try, in my head at least, to squash into the corner of the lift and I don’t look at her for the shame of seeing the look in her eyes. The look of shock or horror. I was grateful to escape the lift.

Then, as I am unlocking the door, I wondered if she thought it was me who made the other lift stink? I hope not.

To be honest, the heat last night (and hurrah that it has finally arrived) was so hot that no matter what I do I have a permanent film of perspiration. It gets worse after a shower, even if the shower is cool, but at least I feel clean. However, this is the weather that I prefer. I can shower as often as possible and would sooner do that than be even a little cold.

So, are they engaged, or not? I really don’t know. F was sporting a very nice diamond engagement ring – but on the third finger of her right hand!

We just couldn’t quite get a straight answer, particularly from A. They implied that, once an actual date had been set for the wedding the ring would be moved to the left hand. This was just a sort of half-commitment.

END_OF_DOCUMENT_TOKEN_TO_BE_REPLACED

Most of my favourite writers and singers are women. My all-time favourite is Joan Armatrading. I first saw here in 1977 not long after she had released Love and Affection but, I seem to remember that it may have been the album after that – Show Some Emotion.

A great artiste, to be sure. From that time I have seen her in concert almost every tour, except, perhaps, for a couple of tours.

END_OF_DOCUMENT_TOKEN_TO_BE_REPLACED

I tend to get roped into all sorts of things here on the basis that I am a native English speaker – and the only one in the company.

END_OF_DOCUMENT_TOKEN_TO_BE_REPLACED

I tried to get out of it but not so that it was obvious. My heart was pounding, my stomach muscles (what’s left of them) were flexed, almost painfully. I tried to relax. I forced myself to relax and it almost worked.

END_OF_DOCUMENT_TOKEN_TO_BE_REPLACED

From Tripoli in Libya! Via email!!

Now, as far as I know, I don’t actually know anyone who either lives in or travels to Libya.

END_OF_DOCUMENT_TOKEN_TO_BE_REPLACED

I’m not quite sure why I always seem to end up involved in Engineering. I don’t like it and I don’t really find it interesting. Sure, I can talk the talk and interact with Engineering people but it’s just lumps of metal (or plastic, or some other material) which are eventually put together to do a job. My real interest is only in the fact that the ‘job’ gets done.

Maybe I am just a grumpy old git.